Call for applications for the CHA Sam Masry award

The CHA is looking for nominations of potential recipients for the award. The nominees will have shown a deep dedication for the advancement of the discipline throughout their career, nationally or internationally, as an entrepreneur or through other professional achievements. They will have maintained the highest ethical standards and a desire to seek and openly share advances in the field. Submissions can be send to president@hydrography.ca 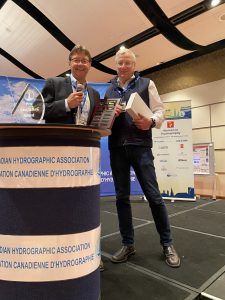 Salem (Sam) Masry (1938-2020) immigrated to Canada from Egypt in 1966 after completion of his PhD at University College, London. He began his career at the University of New Brunswick where he became a professor and a founding member of the department of Surveying Engineering. Dr. Masry was a pioneer in the field of digital mapping and, in 1979, founded CARIS to develop digital mapping software, growing to be one of the leading companies in its field internationally. Sam received many awards in recognition of his work and his contributions to his community, including the Talbert Adams Grand Award by the American Society of Photogrammetry, appointments to the Order of Canada and the Order of New Brunswick, and an honorary Doctor of Science from UNB. Sam was an ethical and dedicated leader and entrepreneur with international influence, and a major champion for the importance of well-managed hydrographic and other digital data for the benefit of all.

Larry has participated in more than 95 cruises (over 75 months at sea!) and has been chief or co-chief scientist of numerous expeditions, including two legs of the Ocean Drilling Program and nine mapping expeditions in the ice-covered regions of the high Arctic. He has served on, or chaired, far too many international panels and committees and has the requisite large number of publications on a variety of topics in marine geology and geophysics. He is the recipient of the Keen Medal for Marine Geology and an Honorary Doctorate from the University of Stockholm. He was a member of the President’s Panel on Ocean Exploration, National Science Foundation’s Advisory Committee for the Geosciences, and chaired a National Academy of Science Committee on national needs for coastal mapping and charting as well as the National Academies report on the impact of the Deepwater Horizon Spill on ecosystem services in the Gulf of Mexico. He was the co-chair of the NOAA’s Ocean Exploration Advisory Working Group, and the Vice-Chair of the Consortium of Ocean Leadership’s Board of Trustees.  He is currently the Chair of the National Academies of Science’s Oceans Studies Board, Chair of the MARUM Science Advisory Board, and is a member of the State Dept.’s Extended Continental Shelf Task Force and the Navy’s SCICEX Advisory Committee. In 2016, Larry was appointed by President Obama to the Arctic Research Commission and in 2017 he was elected to the Hydrographic Society of America Hall of Fame. In 2018, he was elected as a member of the National Academy of Engineering, and, in 2019, was elected as a foreign member in the Royal Swedish Academy of Sciences.  In 2020, Larry was selected as the first recipient of the Walter Munk Medal from the The Oceanography Society and named a Fellow of the American Geophysical Union. In 2021 Larry was elected to Norwegian Academy for Polar Research.

Larry’s current research deals with increasing the efficiency and effectiveness of seafloor mapping and remote characterization of the seafloor (including the use of autonomous vehicles) as well as advanced applications of 3-D visualization to ocean mapping problems and applications of mapping to Law of the Sea issues, particularly in the Arctic.